As Chapters are our primary focus at Gaiscioch and often involved hundreds of people, we all like to take vacations away from these games to play other things. The Gaiscioch Adventures are small scale recreational groups of members that are playing other titles not supported by our chapter system. These can range for a circle of friends playing a PlayStation game together or a larger group of players trying out a new MMORPG that has arrived on the scene.

Any activity that involves 2 or more people can be claimed for Social Points which go toward your Family Honor Points and Family Vault Credits. The more you participate in an Adventure the more ranks you'll unlock within that adventure. In addition you build experience for the Adventure itself which overtime will unlock new features and abilities for the adventure.

Adventures are a collaboration between Warparties. As warparties go on adventures they earn the adventure experience which unlocks new abilities. The more people play, the more support the adventure gets. Players can join the adventure then choose a warparty to become a part of. 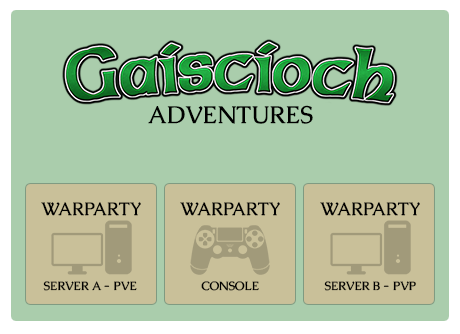 Creation and Removal of Adventures

Any Lorgaire or higher member will be able to create an Adventure that currently exists in our Gaiscioch Magazine games database. If a game is not available contact Foghladha for inclusion. Once the Game is listed in the games directory players can access it from the Create Adventure button on the main Gaiscioch Adventure page.

Any member can lead an event in a Gaiscioch Adventure. Being both Leader and Follower earn the same number of Social Points there is no requirement for members to earn a higher rank to post leadership for an event. Simply click the "Lead an Adventure" button on the adventure you'd like to lead and post your event.

For those taking up the leadership seat you can rally troops to the field by scheduling an event. You will need to gain the role of Member (Lorgaire) first before you'll gain access to that system. Scheduled events will appear on the homepage for all of those who are members of the community and also post directly in Discord moments before the start of your event. This is a great way to get people involved

You can claim participation in an event the same way you do in a chapter. Simply visit the event record which you can find in Discord after the event concludes, on the homepage under recent events, or on the adventure page under recent events. You can alternately click the Participate button on your command center to see a full list of events that transpired over the past 7 days. You will have 7 days to claim the event before it locks and points are awarded.

Unlike Chapters, Adventures score events based on the number of people involved. Any event that has less than 2 people claiming the event will be deleted and no points will be awarded. The scoring is as follows:

Last Edited on: 12/28/2018 at 12:43 PM
"It's not the loot and accolades you walk away with, it's the memories and friendships that you cherish forever." - Foghladha
Awards & Achievements